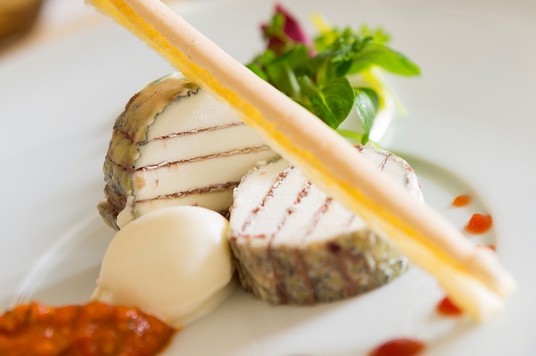 ...with Tapenade and Harissa Tomatoes.

- a sprinkle of fresh thyme

Remove the tomato skins, either with a vegetable peeler, or by putting the tomatoes in boiling water for a few seconds to soften their skins before removing them.

Cut the tomatoes in two and remove the seeds.

Remove the red pepper's skin with a vegetable peeler.

Cut in two and remove the seeds.

Cook in the oven until the vegetables are lightly coloured.

Next, cut the vegetables into small pieces, adding the touch of harissa and the coriander. Then put in the fridge until ready to dress the plates.

Cut the Sainte-Maure-de-Touraine goat's cheese lengthwise into five slices, using a cheese-wire if you have one.

Having covered each slice with the olive tapenade, put the layers back together in the original shape of the cheese.

Then cut the block into eight round slices of the same thickness.

Place two slices at the centre of each plate, one laid flat, the other standing up.

Put a moulded spoonful of the harissa tomato concoction on the side, along with the mixed, seasonal baby salad leaves and a trail of olive oil.